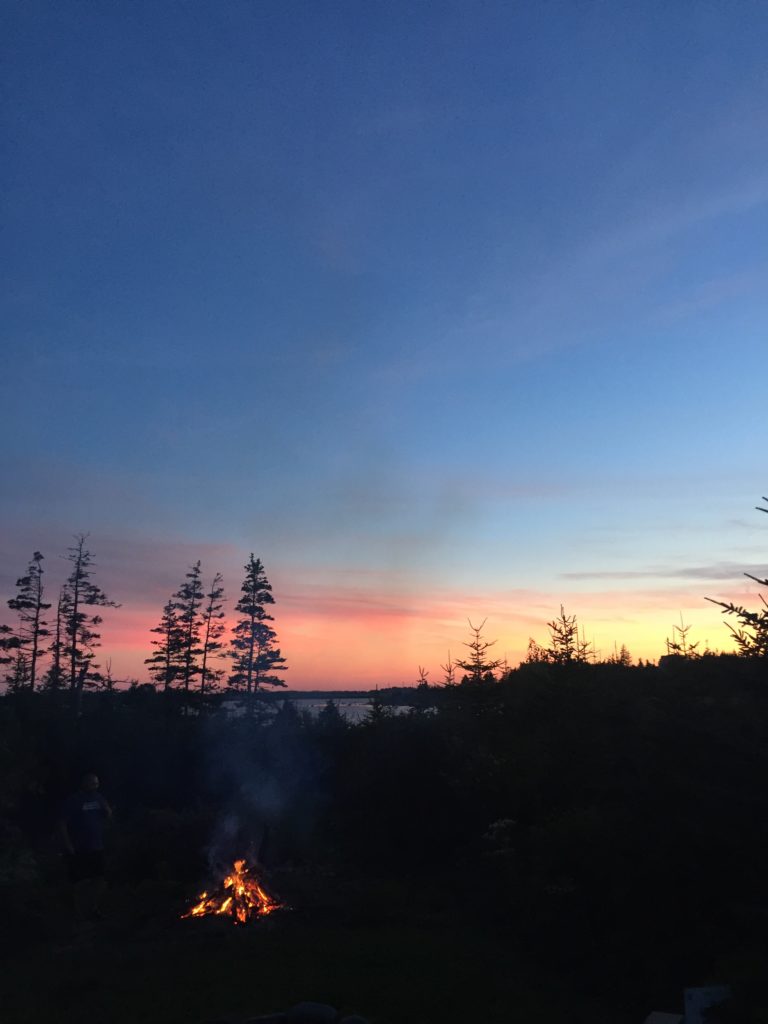 In the mornings, I try to go for a walk.

(After years of lighting candles, choosing oracle cards, tongue-scraping, lemon water, meditation, and various other attempts at creating a meaningful morning ritual, I found that a walk suited me best).

I was proud of myself for committing to this small act of self-tending each day, and so I began picking up a shell on the beach on my way home as a symbol – a reminder that I had kept a promise to myself to do something for myself that day.

Soon after starting my new morning routine, I found that as the trail I walked on became increasingly familiar, the thoughts that I was hoping to get a momentary reprieve from filled my mind once again.  They were often worries: my brain’s way of doing something (dammit!) when life seemed unsafe or uncertain.

Along the trail, there is a giant rock:  it comes up as far as my torso, and offers a beautiful resting place when I lay my chest across it.  And so, I began the practice of laying over the rock and imagining that all my worries were seeping into it.  That rock has been here on earth a lot longer than I have, and I think it can hold my worries for me, at least for a moment.

These are my rituals.

Ritual often gets conflated with religion (or witchcraft…but I’ll get to that) and it’s misunderstood to be something that must involve, I don’t know, incense, or something.  I know, in the past, I’ve thought of ritual as being just a little too precious – not something that was for every day life.

This summer, I had the great pleasure of taking part in a four-part program on ritual called The Possibility of Wonder (I know, right?).  The program leader, Tiu de Haan, used this way to define ritual:

“Ritual is a way to make meaning out of a moment.”

And of course, our everyday lives are filled with rituals, like marriage ceremonies, funerals, and tail gate parties…but if ritual is *just* a way to make meaning out of a moment, then anything could be a ritual.

Even laying over a rock or picking up a shell from the beach, if they hold meaning

When I began to understand this definition, I made a connection:

Rituals have a way of slowing down time of causing us to notice our lives, even if momentarily.

The other practice that I do that allows this same small pause in the flow of my everyday life is gratitude.

And this ability to notice our lives is what I believe holds the key to our joy.

(I like to call it “fierce joy,” to differentiate it from any thoughts of scampering through sun-drenched fields in a bikini that you might be having – ahem…which is also, for most of us, to differentiate it from anything that’s actually possible.  When you are fiercely dedicated to finding the joy in your life, you find it even in the darkest places.  That’s fierce joy).

Well.  Let me allow Germaine Greer to take over here:

“Ultimately the greatest service a woman can do to her community is to be happy; the degree of revolt and irresponsibility which she must manifest to acquire happiness is the only sure indication of the way things must change if there is to be any point in continuing to be a woman at all.”

And hey: let’s talk about revolution.

Because despite the fact that we all do ritual all the time and have throughout the ages, the actual word ritual and the act of creating ritual is something that has also carried a lot of secrecy and shame.  And ritual creation has also often been something that happens as a result of women’s emotional labour: we plan the baby showers and wedding ceremonies and order the flowers for the grave and bring the ice cream to a friend who’s suffered a hard breakup.

I think that by honouring the fundamental requirement we as humans seem to have for ritual, we must also honour that which has typically been women’s role in upholding this important aspect of culture and communities.

And so, above and beyond the incredibly powerful personal value ritual can have for our lives,

I daresay that creating ritual is yet another way that we can begin to reclaim the skills and competencies for our sovereignty as women.

And so I wonder…

…what small part of your day or your week might you create a deeper meaning for?  What might you ritualize in your own life?

…how might you bring ritual into the community around you?